The objective of this article is to describe the role of Islam education in global context, especially to solve several problems in Indonesia, for example, poverty, unemployment, natural disaster, social disorder, and other serious problems. Obviously, although they bring about some positive effects for development of this country, these problems are also effects of globalkation. We are often trapped in economic discourse when discuss it and overruling other aspects such as ideological, cultural, and social; whereas, they are as important as economic discourse. In other words, globalir<ation covers multi-aspects in our life, so that some of new obligations of Islam education are to answer various problems of Moslem life.One of the contradictive issues is that globalkation becomes a part of our life because we are a part of globalkation. Therefore, we have to eliminate science dichotomy between religion and science. Escaping from the pro and the contra Islam education claimed take able to answer the new problematic of Moslem life. The Moslem must be supported by life skills in order to survive in the face of the globalization. Summarily, we have to exchange classic paradigm with the modern one that is responsive to social problems, especially related to the religion.

Authors who publish with this journal agree to the following terms:

EDUKASI  have CC-BY-SA or an equivalent license as the optimal license for the publication, distribution, use, and reuse of scholarly work.

EDUKASI  is licensed under a Creative Commons Attribution 3.0 International License

You are free to:

You may also start an advanced similarity search for this article. 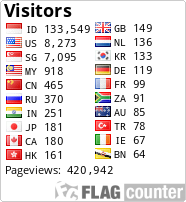